Tabea Hochstrasser
Geschiedenis
This master’s thesis examines the gendered constructions carried out by eighteenth-century Scottish gallows speeches from women condemned for infanticide. By analysing Lowland broadsides it argues that broadsides could contain authentic traces of lower class women’s voices. By confessing and making a ‘last speech’, women simultaneously made themselves subservient to authorities and acquired an agency to articulate their own opinions on their crime and sentencing. Moreover, they acquired a spiritual authority on the brink of their death, serving as an example on the gibbet which should not be followed, being able to warn others as they had confessed their sins and were about to face a higher judgement. Thus, this thesis argues, Scottish gallows speeches did not only serve to reinforce the judgement of authorities, but also to spread lower class, female opinions on the early modern justice system. 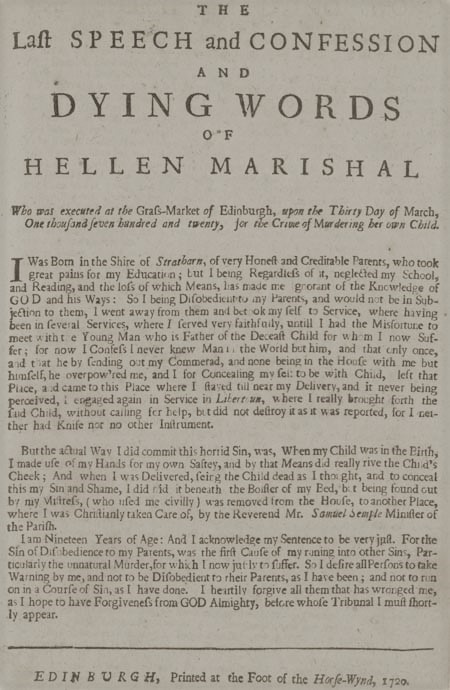 The Last Speech and Confession and Dying Words of Hellen Marishal (1720). NLS, Ry.III.c.36(069). Reproduced by permission of the National Library of Scotland.

“A Letter from Helen Hutton, who was Execute at Haddington, on Friday last, the 25th of February, written to her Mother a few Days before her Execution.”, NLS, Ry.III.c.36(103).

“GROANS FROM THE DUNGEON; OR THE Sorrowful Lamentation of Agnes Crockat, now under Sentence of Death in the Tolbooth of Edinburgh, for murdering her own Child.” ESTC T228949, NLS ABS.9.95.1.

“News from MUSSLEBURGH, Giving a faithful Narrative of the wonderful Restoration of Margaret Dickson to Life, who was execute in the Grass-Market of Edinburgh, the 2d of September, 1724.” ESTC T182162, NLS, RB.I.179(91).

“THE CONFESSION Of Agnes Craig, Daughter to the Deceased John Craig and Agnes Grierson, who Lives at the Bridge-End of Minnijoe, in the Paroch of Glencairn when the said Agnes Craig was Execute in Drumfries, on Wednsday being the 5th of June, Anno 1717. For the Murdering of het own Child.” ESTC T201684, NLS, Ry.III.c.36(35).

“THE Last SPEECH and CONFESSION AND DYING WORDS OF HELLEN MARISHAL Who was executed at the Grass-Market of Edinburgh, upon the Thirty Day of March, One thousand seven hundred and twenty, for the Crime of Murdering her own Child.” ESTC T193508, NLS, Ry.III.c.36(069).

“THE LAST SPEECH AND CONFESSION OF Anne Fogget, Burnt for the Murder of her Husband Abraham Fogget. Who was Executed at York September 10. 1716”, NLS, Ry.III.c.36(025).

“THE LAST SPEECH AND CONFESSION OF JEAN WILSON, who lived in the Paroch of Calder. And was Execute at the How-Gate-Head of Glasgow, upon Wednesday the 30th of August, 1721. For murthering of her own Child.” ESTC T193454 Ry.III.c.36(75).

“THE LAST SPEECH and CONFESSION OF Margaret Crooks, who was Executed at the Grass-Market of Edinburgh, the twenty fourth of December 1718. for the Murthering her own Child.” ESTC T193456, NLS, Ry.III.c.36(042).

“THE LAST SPEECH AND Dying Words OF JOHN TREPLECOCK, Who was execute in the Grassmarket of Edinburgh, on Friday the 1st of February 1723.”, NLS, Ry.III.c.36(093).

“The last SPEECH and dying Words of Margaret Smith, in the Paroch of Combernauld, Who was Execute at Dumbarton on Friday the last Day of May, 1717, for Murdering her own Childe.” ESTC T193531, NLS, Ry.III.c.36(34j).

“THE LAST SPEECH CONFESSION and Dying Words of James Plunkett, Who was Executed at the front of the Tolbooth of Glasgow, on Wednesday the […]th of January 1792, For the horrid crimes of street robbery and theft.”, ML, 311734 V1.56.

“The Last SPEECH CONFESSION, and Dying WORDS of MARGARET ADAM, Who was Executed at the Grass-Market of Edinburgh, upon the 2d Day of March 1774, for the Murder and Robbery of JANET McINTYRE, Shop-keeper in Glasgow.” ESTC N477628, NLS, RB.I.238(14).

“THE LAST SPEECH CONFESSION and Dying WORDS OF MARGARET ADAM, who was Execute in the Grass-Market of Edinburgh, on Wednesday the 2d of March 1774. for the Bloody Murder of Janet McIntyre, Shop-keeper in Glasgow, and her Body given to Doctor Monro for dissection.”, Mitchell Library, SR347 311733, no number [between V1.23 and V1.25].

“THE LAST SPEECH, CONFESSION and WARNING, Of Margaret Dickson, who was Execute in the Grass-Mercat of Edinburgh, for the unnatural Murder of her Own Child, on Wednesday the 2d of September 1724.” ESTC T193695, NLS, Ry.III.c.36(94).

“The last SPEECH, Confession and dying words of SARAH CAMERON, who was execute at Stirling on Friday the 29th of October 1784, and her body given to the doctors to be dissected, for the murder of her own child.” ESTC N477652, NLS, RB.I.238(18).

“THE SECOND SPEECH Of MARGARET ADAM. OR. A Full and Particular ACCOUNT of the manner of her Execution, Behaviour on the Scaffold, and Dying Words to her Friends, and those good Christians who attended her in her last Moments. With an account of JAMES BROUN’s Reprieve.”, Mitchell Library, SR347 311733, Vol.1.32.

ASHTON, J., Chap-books of the Eighteenth Century, with Facsimiles, Notes and Introduction, Londen, 1882.

DUGAW, ‘Structural Analysis of the Female Warrior Ballads: The Landscape of a World Turned Upside Down’, Journal of Folklore Research, 23 (1986), 23-42.

FALLER, L.B., Turned to Account: The forms and functions of criminal biography in late seventeenth- and early eighteenth-century England, Cambridge, 1987.

–, ‘The Emergence of the Scottish Broadside Ballad in the Late Seventeenth and Early Eighteenth Centuries’, Journal of Scottish Historical Studies, 31/2 (2011), 169-194.

– , ‘‘Monsters of the Vilest Kind’: Infanticidal Women and Attitudes towards their Criminality in Eighteenth-Century Scotland’, Family and Community History, 11/2 (2008), 100-115.

KUSSMAUL, A., Servants in husbandry in early modern England, Cambridge, 1981.

NEUBURG, V., Popular literature, a history and guide: From the beginning of printing to the year 1897, London and Totowa, 1977.

PETTEGREE, A. ed., Broadsheets: Single-sheet Publishing in the First Age of Print (Library of the Written Word Volume 60 - The Handpress World, 45), Leiden, 2017.

– , The reform of punishment and the criminal justice system in England and Wales from the late seventeenth to the early nineteenth century, Unpublished doctoral dissertation, University of Hull, School of Histories, Languages, and Cultures: Philosophy, 1988.

– , Weep Not for Me: Women, Ballads, and Infanticide in Early Modern Scotland, University Park, PA, 1997.

ZEMON DAVIS, N., Fiction in the Archives: Pardon Tales and their Tellers in Sixteenth-Century France, Stanford, 1987.